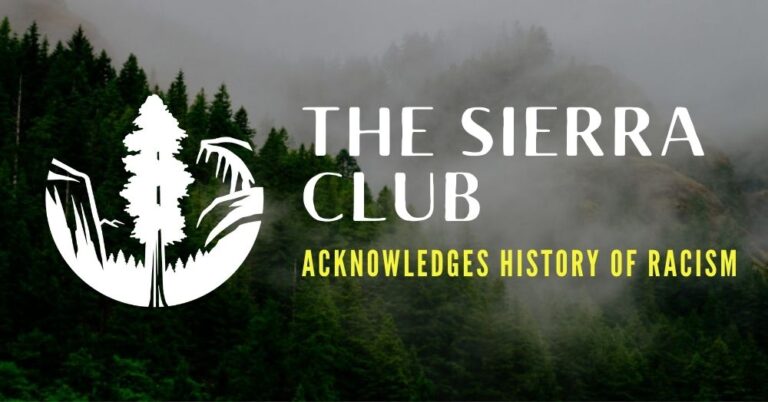 The Sierra Club apologized for white supremacist comments made by its founder John Muir. There does not seem to be any sign of a cancel mob looming at the doors of this historically progressive organization.

The move to acknowledge a past of racism and discrimination came directly from Executive Director Michael Brune.

A NYT article offers a nice summary of the history.

This quote from their website offers a clear expression of their perspective.

The whiteness and privilege of our early membership fed into a very dangerous idea — one that’s still circulating today. It’s the idea that exploring, enjoying, and protecting the outdoors can be separated from human affairs.

Overall, I can appreciate the nuances of engaging nature along with society and morality. Indeed, it can be difficult to engage these forces in a holistic fashion. Regarding the issue of historic racism, though, can we level the charge of whiteness as the fundamental reason for racist environmental policies? Let’s unpack this a bit further.

I think the definition offered by the National Museum of African American History and Culture is helpful here.

Whiteness and white racialized identity refer to the way that white people, their customs, culture, and beliefs operate as the standard by which all other groups of are compared.

What muddies the water concerning the use of the term “whiteness” is the universal overtones found therein. But, this definition does not make it clear that “whiteness” is a branch of the general phenomena that comes from a dominant group.

In short, every dominant group gets to make the rules. And it is typical of human societies to perpetuate ideas of entitlement and even supremacy over other groups. Therefore, the American (or Western) culture is not unique on this front.

Instead, I would like to propose that the term itself represents a false sense of social superiority. The use of the term “whiteness” assumes a level of success in changes to social systems beyond that of typical group dominance.

This leads to the issue of privilege. Our disdain for racism, I think, stems from our historical experiences with WWII and the Cold War. We have seen how far racial hatred can go.

And yet, the assumption that our sense of privilege overwhelmingly impacts the environment is untenable. It gives to much power to the concept itself. It assumes that societies can overwhelm nature. A laughable proposal when one considers the vastness of the universe.

I found the The Sierra Club statement worth reading and I would encourage everyone to read it carefully. It offers a compelling introduction into the difficulty of understanding our impact on our surroundings.

Our pursuit of justice and balance with our world is a noble endeavor. One which I hope everyone of us seeks to pursue. The temptation, though, is our presumption of greatness!

I believe that our actions impact our world, our society and our conception of morality. But the slippery road of our existence always presses towards extremes: even when attempting to combat it.

If we are going to be serious about combating supremacist thinking. We need to adopt more careful terminology lest we perpetuate the same injustices of our past. Getting rid of the term “whiteness” would be a great place to start.