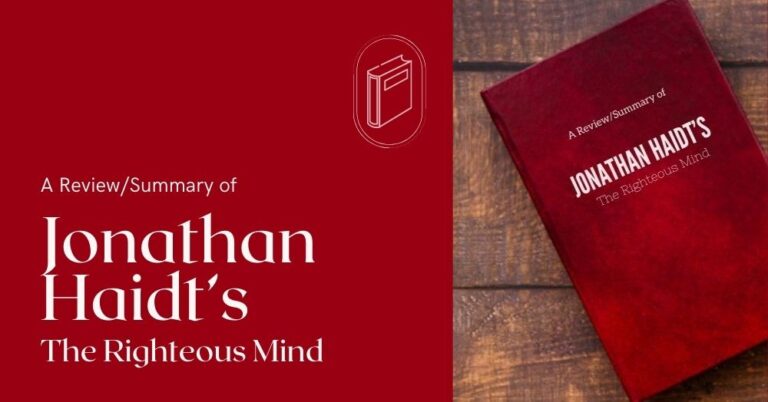 A Review/Summary of Jonathan Haidt’s The Righteous Mind

The Righteous Mind by Jonathan Haidt tackles the problems that emerge when attempting to talk about politics or religion. Over the years, Haidt has dedicated his life to building connections between opposing political factions. His research has led to the founding of Heterodox Academy. Here is their mission statement.

“To improve the quality of research and education in universities by increasing open inquiry, viewpoint diversity, and constructive disagreement.”

Though written many years ago, the concepts in the book seem more relevant than ever as America goes through its cultural and political upheaval.

And certainly Haidt’s academic and professional career has been tackling the problem of communication and education head-on. Fortunately, for us, his writing style presents his academic research in a way accessible to most readers. The Righteous Mind builds off of his research on the mind found in The Happiness Hypothesis. And serves as a precursor to his more recent book, The Coddling of the American Mind.

A Problem of the Mind

In The Righteous Mind, Haidt attempts to define the moral barriers for productive political and religious dialogue. The problem, as he sees it, is that the divisions that we see around us are the result of evolutionary prompts that are not readily obvious.

By unpacking the nuances of our mind, we can recognize more clearly how our intuitive preferences direct our moral reasoning. Ultimately, Haidt hopes that this realization will prompt more constructive discussions around divisive issues.

Of great significance for us is his daring look at the problem of factions and political gridlock. Reader’s can relate as he shares stories about his own moral journey alongside simplified surveys of big ideas. The end result of Haidt’s work is a clearer definition of morality. And ultimately some practical ways that we can “disagree constructively.”

A critical point that Haidt makes deals the the problem of disagreement. He argues that the root of most disagreements stem from a fundamental confusion about how our minds work. To convince the reader, he offers a layman’s survey of a variety of positions about how we think about the mind.

In the book, Haidt presents builds his case in three sections built around three metaphors: The Elephant and Rider, Our Six Senses, and the Chimpanzee Hive. Each section is integral to his complex definition of morality. So, we too will start with the metaphors and work our way to the moral definition.

Metaphor 1: The Elephant and the Rider

The first metaphor is of the elephant and rider. This metaphor was fully developed in Happiness Hypothesis but is put to practical work here. Haidt proposes that our moral compass is guided primarily by intuition (the elephant) but that we traditionally have focused only on our reason (the rider).

Haidt flips this notion on its head. The rider does not direct the elephant but the other way around. Reason is simply the tool our mind uses to justify our emotive responses to reality. According to Haidt, everybody makes moral decisions based upon their intuition and not reason. We simply use our reason to comprehend and justify the direction we were already going.

Haidt uses the elephant/rider metaphor throughout but adds to it a second metaphor: our six senses. He suggests that just as we have six senses, so to do we have six moral foundations: care, fairness, loyalty, authority, sanctity and liberty. We, as humans, are sensitive to these foundations and respond most favorably to groups that can excite each receptor.

Thus, when we Apply this logic to politics, the politician who can trigger each moral receptor will garner the greatest support. The results? Republicans are able to target all moral receptors with their messaging. Contrary to the Democrats who only target three: care, fairness and loyalty.

While it may seem that the solution is solved by simply targeting each moral foundation, the problem of grouping and individualism is still a problem. Which leads us to his third section.

In section three, Haidt explores the phenomenon that is human individualism and group coordination. His third metaphor utilizes Darwin and it is here where he lays out a fascinating proposal. We are actually “90 percent chimp, 10 percent bee.”

Through research, Haidt presents the fact that our individual selves not only form groups but, when the moment is right, operate without individuality. For example, Haidt refers to the phenomena of wartime and the military cadence where the individual is tuned into the whole.

This hive metaphor helps Haidt outline a number of examples where individuals will sympathize with their in-group and why coordinating with out-groups is so hard. Our selfish desire to protect ourselves extends to the group we associate with and our survival instincts prompt us to defend our groups with our lives.

Such cohesiveness is a good thing on the evolutionary scale, but a real problem when it comes to forming healthy societies. In history, the more cohesive the group the more likely their survival. That is why, as Haidt argues, that religion is an essential part of our human framework: Religion offers a way to cohere together in the face of the unknown.

At long last, Haidt presents to his readers a consumation of his metaphors with a definition of morality. Here, Haidt relies heavily on Plato’s Gloucon and Durkheim.

In order to strengthen bonds within communities, lasting connections that minimize differences and emphasize similarities is very important. As groups are able to focus on similar goals, bonds are strengthened. For instance, when dealing with racism, Haidt argues “emphasizing differences makes many people more racist not less.” It is here, Haidt realizes, where political and moral efforts to emphasize diversity has caused more problems than solutions.

Haidt does not suggest for a complete homogenization of society. In fact, he argues that tensions between groups are a necessity to evolutionary progress. Rather, the problem comes from when groups become so divided that connections become nearly impossible.

The solution stems not from an understanding of the why or how of morality, but what morality does in society. By understanding what makes all of our moral bells ring, it provides a place where we can focus our policies and aspirations. And hopefully, in the end, form build bridges between groups that we disagree with.

This is a fascinating proposal for moral life and action. If the reader can forestall reason for a moment to contemplate our intuitive selves, perhaps we too start constructive disagreements with the woke.