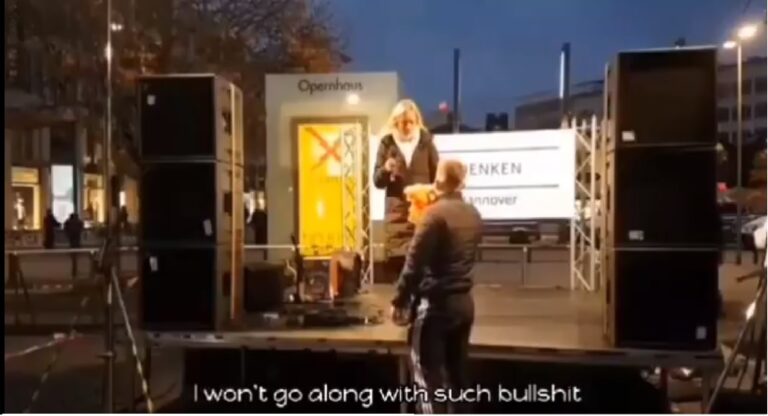 German Anti-Masker Compares Herself To Sophie Scholl. Her Security Guard Quits On The Spot.

In the following video, we see a 22-year-old German woman at an anti-mask event in Germany. In the video, she compares herself to Sophie Scholl. Upon hearing such a comparison, the security guard at the event immediately quits.

As a young woman compares herself to Nazi resistance fighter Sophie Scholl at a 'Querdenker' (Covid-denier) rally in Hannover, the disgusted security guard quits on the spot. pic.twitter.com/k7QoTJw41d

Here is a transcript of all that was said (in the video captions):

Hello my name is Janna from Kasse. I feel like Sophie Scholl because I have been active in the resistance for months, making speeches, walking on demos, handing out flyers, and register for gatherings since yesterday. I am 22 year old, just like Sophie Scholl before she fell victim to the Nazis, can and will never give up to stand up for freedom, love, and justice.

It was at that point when the security guard handed in his security vest (?). In doing so, he said…

It was from there that people in the audience started stepping in. He then went on to explain that..

This is trivializing the Holocaust.

And before leaving, he left with one final parting word.

At the end of the video, you see her throw a mini-tantrum (presumably crying) as she stomps off the stage. These final moments illustrates how far she is from being like Sophie Scholl.

Sophie School was a German anti-Nazi activist within the White Rose non-violent resistance group during WW2. She, along with her brother Hans, were convicted of high treason after having been found distributing anti-war leaflets at the University of Munich.

In her final day, before being taken away to be executed, her cellmate Else Gebel recorded her final words.

It is such a splendid sunny day, and I have to go. But how many have to die on the battlefield in these days, how many young, promising lives. What does my death matter if by our acts thousands are warned and alerted. Among the student body there will certainly be a revolt.

According to Nicholas Christakis, her equanimity and composure prior to her execution brought a Nazi judge to tears.

Since the 1970s, she has been extensively celebrated for her anti-Nazi resistance work.

To read more about

A Brutal Quote From The Gulag Archipelago

Below, I would like to share one of the most visual and brutal paragraphs in the book The Gulag Archipelago by Alexander

It has been almost two years since the Jussie Smollett race hoax scandal. Yet, we see very little critical analysis around accusations