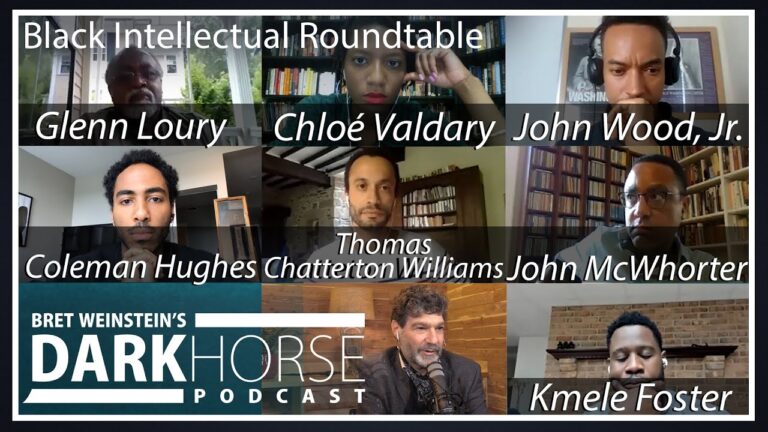 The purpose of this summary is to survey the various speakers and the sources they referred to. This podcast is led by Bret Weinstein and featured Glenn C. Loury, Kmele Foster, Thomas Chatterton Williams, Chloe Valdary, John Wood Jr., John McWhorter, and Coleman Hughes.

This podcast is especially helpful for understanding and articulating the terminology and blindspots around conversations of race in America. Weinstein leads the conversation in the direction of reparations and material redistribution. He argues that corruption in the system must be addressed before reparations will make sense. But Bret’s hypothesis, that the solution to racism and systemic problems can be solved by ending corruption, is problematic. The panelists, instead suggest that the problem is more complex than he allows for. The following is a summary of their positions.

Loury is critical of how issues of race are talked about in society and deeply skeptical about reparations. He argues that reparations would simply allow white communities to write off the greater problems that plague American society. The problem of reparations is made all the more challenging with various groups attempting to turn all social issues into matters of race. Loury is deeply concerned with race narratives that minimize aspects of personal responsibility. For Loury, a careful look at welfare, affirmative action and crime in and around Black communities must be highlighted and dealt with first. Loury also points to public safety and education as failed systems that have perpetuated the problems of welfare, access, and crime. The failure of public education stems from a fundamental disconnect between left-of-center ideaologues who create the models and yet fail to address the problems facing Black communities.

Rogers Brubaker, Ethnicity without Group and this article.

Kmele is concerned more with what he sees as an “imagined genocide” of Black America.The timing of current movements by anti-racist groups are attempting to take advantage of a  time of distress and uncertainty. He understands the need to focus on issues of race and racism but that such issues are not obviously central to the broaders problems faced. Concerning reparations, he is mostly in agreement with Loury.

While there may be some merit in reparations for Jim Crow, it is difficult to quantify ancestral injury. Solutions must be able to address complexity and the current hyperfocus around race is a flattening of the discussion in a wholly unproductive fashion. Kmele is uncertain about what solutions will work although he does seem to favor charter schools and other private initiatives. Finally, Kmelle is especially concerned about the current trend towards leaderless movements and sees the concept as dangerous and something that must be addressed.

Williams favors reparations as an effective way to heal divisions. He states “Race is not real but Racism is.” America is a violent society especially when compared with other countries around the world. For this reason, Williams argues that all Americans should be concerned about police violence, but that efforts to distinguish Black problems creates an unnecessary barrier. In response to Loury’s pessimism concerning reparations. Williams argues that it is not demeaning to deal with historical harm against a group of people. He suggests that historically recognized instances such as redlining and disparate hiring practices, if addressed fiscally or materially would not be worse than doing nothing.

Wood posits that America is not fundamentally racist but that it does face real systemic and complex challenges. The current zeal for an ideological victory for social justice presents both an opportunity and a danger for society. The solution is an active engagement in sensitive listening and an intentional moving away from vilifying groups. Wood suggests that many problems stem from a self-destructive Black culture. This problem emerged in response to a series of events starting in the 1960s. (1) The decline of the working class through immigration and automation. (2) The double edged sword of welfare. And (3) the war on drugs. Wood suggests that these moments are critical for understanding Black anger today. Without engaging in these larger historical factors, reparations will not succeed.

Wood emphasizes that conversation must go deeper to discuss the role of culture and society in a meaningful way. Wood believes that such conversations will help us recognize and address the real systemic problems America faces.

McWhorter laments the rising popularity of radical strains of anti-racism in America. Anti-racism is “intellectually mediocre” but effective in making the general population afraid of disagreeing and being called a racist. Anti-racists, McWhorter notes, have taken the dual pressures of the pandemic and George Floyd to attempt a takeover. Too few realize the neo-Stalinist Orwellian trajectory of these actors. Despite doubts, McWhorter hopes that some organizations will begin to speak out against it. He also notes that problems within Black communities culturally stem from the 1960s. For example, the rise of violence among Black youth represents internal problems. While internal violence is not ontological, these acts do have meaning and must be explored more deeply.

Nevertheless, it is the lack of focus on  these problems that minimize the effectiveness of reform. McWhorter points to the American inteligencia and the tendency to promote victimhood among their Black cohort. The allowance of acadmeic victimhood makes a material redistribution unproductive. A number of Black intellectuals are too invested in sustaining ideological divides. Therefore, even if reparations occurred, these anti-racists would not be capable of recognizing these efforts as positive. For McWhorter, the tragedy’s we see are not simply pathological, they have meaning and can be addressed. But first, we must get past ideological views that will not be satisfied by any level of reform. There is also a need to circumvent the dangerous levels of anti-intellectualism within Black communities especially in education.

Hughes recognizes that policing is a difficult job in America. The large stockpile of weapons leads to a rational fear among law enforcement. This fear foments altercations which suggests a level of complexity to the problem that goes beyond typical left wing rhetoric. Hughes is optimistic that law enforcement can avoid George Floyd incidents in the future, but that will not solve the problem of police violence.

Media’s exacerbation of police violence does not help either. The Media narrative that displays Black people as preferred targets while omitting the numerous white fatalities that also occur leads to worthless solutions to a major problem. Reparations or corporate representation are fake solutions for police violence. Hughes also finds the Black on Black crime arguments as a way to counter BLM equally unproductive. He points to the normalcy of group violence throughout history and that the real anomaly is that there are communities less violent. Therefore, conversations about material redistribution, corporate representation or interracial violence should be their own discussions.

Ultimately, Hughes is pessimistic concerning the reality of solving what may be a self-generated problem. It may be possible to settle issues of inequity and injustice while still having the same problems among certain groups due to the rigidity of belief and identity.

Steven Pinker, The Better Angels of Our Nature: Why Violence Has Declined “Recent Trends in Wealth-Holding by Race and Ethnicity: Evidence from the Survey of Consumer Finances”

Valdary argues that the manifest problems of inequality and injustice point to a crisis of meaning in America. Anti-racism is a unique characteristic of a society experiencing “spiritual malnourishment.” The solutions, therefore, must be spiritual in nature. She suggests work like her own “theory of enchantment” as an important alternative to the anti-racism narrative. Concerning reparations, Valdary is in favor of creating a pathway to wealth through trusts and financial education for every person who can trace their lineage back to slavery. Such a focused effort would not diminish Black communities but provide a meaningful way to bring positive change. Valdary also offers a unique perspective concerning the disconnect between anti-racist ideologies and incarcerated and abandoned men. The rhetoric of anti-racism, if perpetuated in the jails, would promote the same cycle such groups seek to change. Instead, she argues for the importance of addressing real psychological needs within Black communities.

William A. Darity Jr., Andrea Kirsten Mullen, From Here to Equality: Reparations for Black Americans in the Twenty-First Century