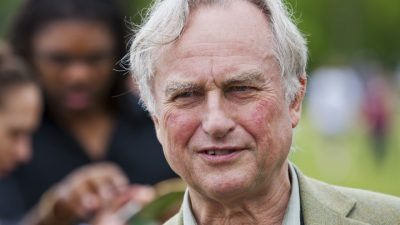 Richard Dawkins, one of the Four Horsemen of  New Atheism along with fellow members Christopher Hitchens, Daniel Dennett, and Sam Harris. He is also a very popular science writer, having written over 10 books, starting with the seminal The Selfish Gene in 1976. Dawkins has a way of explaining the marvel of life to non-scientists, which is why his books are so well-received. The following is a summary of his books, as well as ratings from Amazon (am) and Goodreads (gr).

A book on evolution, Dawkins takes the theory of adaptation and natural selection to the next level. Using the term “selfish gene” to describe the gene-centered view of evolution compared to views which focus on the organism. He theorizes that the more similar two people are genetically, the more likely they are to behave unselfishly towards each other. Using examples from every area of biology, this book lays the foundation for a serious re-evaluation of the theory of evolution.

This book introduces the idea that phenotype should not be scientifically limited to only biological process and that it should be broadened to include all the environmental effects a gene has on the inside and outside of an organism. Dawkins argues that rather than looking at evolution solely through the eyes of survival of the fittest, that it should instead be looked at by survival of each individual gene which combined create the strongest evolutionary interests of organisms as a whole.

Brilliantly written in easy to understand language, this controversial book argues that the only reason we exist at all is due to evolution by natural selection. Dawkins also incorporates a detailed analysis of alternative theories of evolution, methodically breaking down each theory with the reader following right along.

An intriguing, easy to read explanation of Dawkins concept of the ever-flowing river of DNA. Showing in layman’s terms how DNA is eternal, though your personal body is not. How DNA flows like a river through us and into the next generation, and the next after that. This book is a great introduction to Dawkins thoughts.

Called a masterpiece by The New York Times, this book describes a carefully thought out and detailed illustration of the mechanism of life on earth being an evolutionary adaptation. Mount Improbable is a metaphor walking the reader through the peaks and valleys of the journey of perfection and improbability that makes up the complex design of all living things.

A mind-boggling book detailing how natures building blocks are fashioned into our extraordinary beings. He goes on to explain how humans would not exist if it weren’t for the modified bacteria that make up a great portion of our bodies. Going even deeper into detail, this book will guide you on a journey of discovery about how we see and interpret information, relating our minds to the world of virtual reality.

A riveting collection of essays written by Richard Dawkins of his scientific discoveries. This book delves into the deeper workings of Dawkins personal and professional life. Filled with moving tributes to friends, conversations with colleagues, and his own personal note to his then ten-year-old daughter.

An in-depth look into evolution including everything from the latest discoveries in the field of evolution to Dawkins very own controversial thoughts. This book brilliantly explains the link between ourselves and all other forms of life while bringing a new focus to evolutionary history and theory of the past.

Bringing together his knowledge and discoveries through being a distinguished scientist and prominent atheist, Richard Dawkins dives into the irrationality of the belief of God and the destruction religion has brought to the world. Pulling examples from all the way back to the Crusades to the more recent tragic terrorist attack of 9/11, Dawkins examines all forms of the concept of God and offers incredible insight into the benefits of atheism on modern society.

Dawkins takes on anyone who argues the theory of evolution through natural selection. With each page, he sifts through layers of scientific facts to build a rock solid case for his defense against arguments made against evolution throughout history. This page-turner is filled with indisputable evidence left throughout time that convincingly back Dawkins claims.

This book is packed full of well thought out experiments, enchanting illustrations, and mind-blowing facts. Dawkins takes on scientifically explaining a wide array of natural phenomena in a fun and upbeat way that holds the attention of readers of all ages. This graphic detective styled book truly answers many of the wondrous questions about how the world and the universe works.

For the first time ever, look inside the childhood of evolutionary biologist and world-famous atheist Richard Dawkins. This autobiography perfectly depicts the events and people throughout Dawkins life that directly influenced his intellectual development. Filled with interesting details about his parents, moving through his school years, and branching out in college. A truly gripping discovery behind the thoughts and beliefs of such a prominent figure.

The fantastically gripping follow up to Richard Dawkins memoir, Appetite for Wonder: The Making of a Scientist. This book dives even deeper into Dawkins life throughout his discoveries and intellectual conversations that inspired his previous books. This book truly brings the reader into the intriguing life of biologist and world-famous atheist Richard Dawkins.

This New York Times bestseller spans through three decades of Dawkins combined knowledge and curious wonder of the world around us. A captivating book of 42 different essays, from past favorites to 20 essays that have never before been published in the United States, passionately arguing for the values of science. This engaging collection focuses on the beauty of scientific thought and the need for rationalism with scientific credentials to back up his ingenious thoughts.